How Royal Frenchels Were Created

Hello, I am “Windy”, Anahata Graceland, the creator of the Royal Frenchel Bulldog. I have been a breeder for 54 years and having raised French Bulldogs and Boxers for the first 41 years, I was inspired to create Royal Frenchel Bulldogs as a service dog initially. When my daughter was diagnosed with cancer, she needed a great service dog. We couldn’t take our French Bulldogs in and out of medical centers without risking their health. Many people don’t realize how fragile French Bulldogs and other bulldogs are. They don’t do well in high temperatures and if they jump down off of hospital beds, their front legs can fold, causing them to hit their chins and impact their spines. This is a very common injury for a Frenchie. So, we needed a dog that could go into all sorts of medical environments and travel regularly while Sachi, my daughter received her care. The inspiration came when I was standing in-between my living room and kitchen telling Sachi that I would get her the best service dog she could imagine, while all the while, in the back of my mind, I was cringing at the thought of having a big dog as a service dog that ends up with hip dysplasia and other issues, and a short lifespan! Then I would have to care for the dog and Sachi! Not a fun thought. This projection of horror ended when I turned to go into the kitchen and suddenly saw in my mind’s eye a small piece of paper like the ones you practice handwriting on when you are a child. You know, the one with dotted lines on it for upper and lower case letters? This paper had an equation written on it that involved a few breeds of dogs, predominantly French Bulldog and Cavalier King Charles Spaniel. I remembered telling my mother at 5 or 6 years old that I would “make my own special dog one day” and we always thought it would come earlier… but it came at the most unexpected time and actually so unexpected, I had nearly forgotten the original moment when I knew that I would one day create a breed of dog! 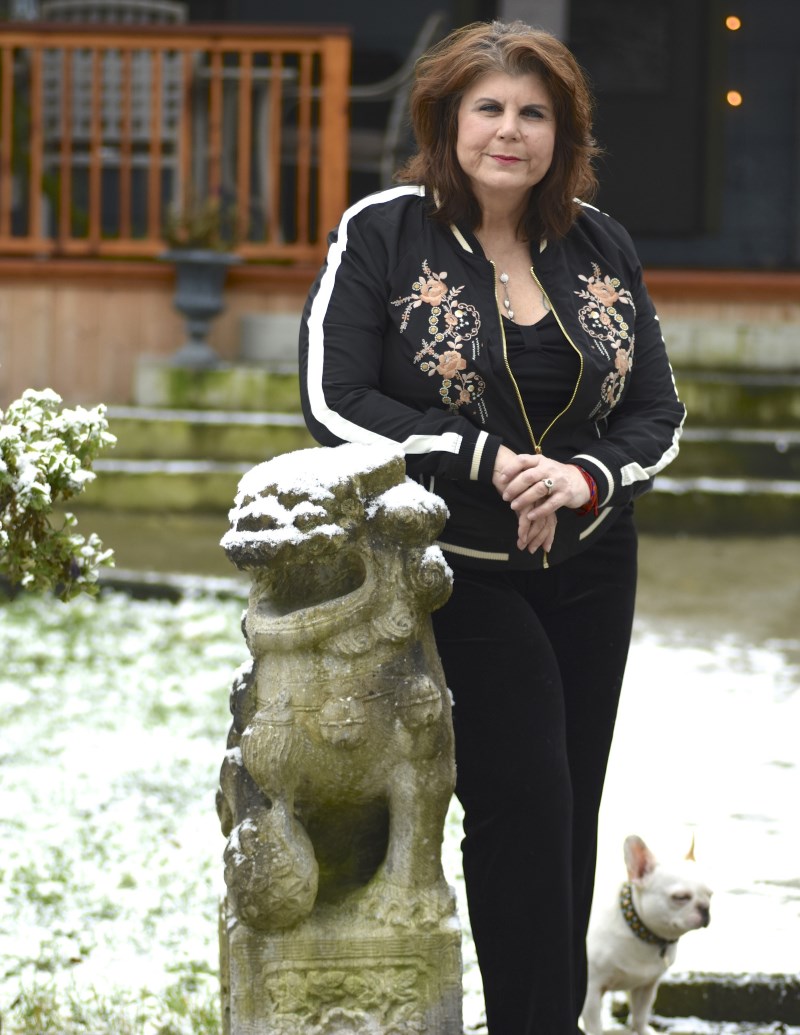 Since I had been a breeder for so many years, and I had relationships with breeders all around the country and Europe, I had the best dogs at my disposal. It was truly a blessed event. Somehow, my years of experience breeding dogs and knowledge of the breeds, all magically rolled up in that moment’s creative surge. And so Royal Frenchels were created! Royal Frenchels became a great service dog to many in the medical arena. Doctors, nurses and many patients and families would meet Sachi’s dogs and immediately want one of their own. So, Royals spread from hospital to hospital in the Seattle area. When people saw a Royal on the street they wanted to know about them and so people who visited Seattle from other places ended up coming to see me as well. So, here we are today ~ Now the Royal Frenchel Family extends over the US, Canada England, France & Italy too! 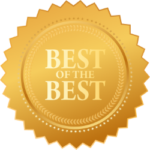 Royal Frenchel Bulldogs just won the Top Award of Pets Best and Farmers Insurance Companies for being a top breed to buy for best health, personality, and longevity! After studying 246 breeds and 140,000 dog policies, Royal Frenchel Bulldogs was awarded the Top Dog for Bulldogs and Royals were in the top 2 breeds out of the 246 breeds! I didn’t even know we were up for an award until after it had happened when a customer wrote and let me know and told me she notified the group to include them in the test. Thanks Pamela! You’re awesome! 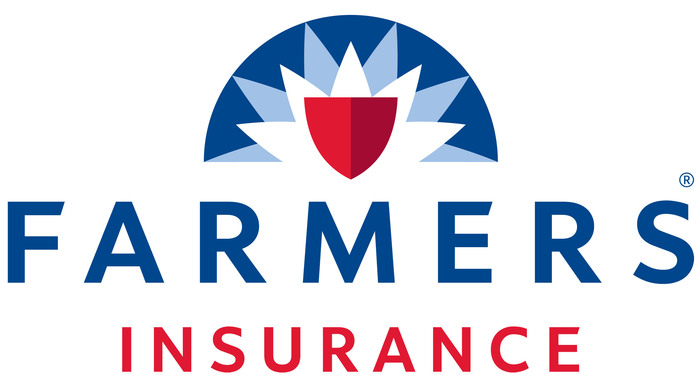 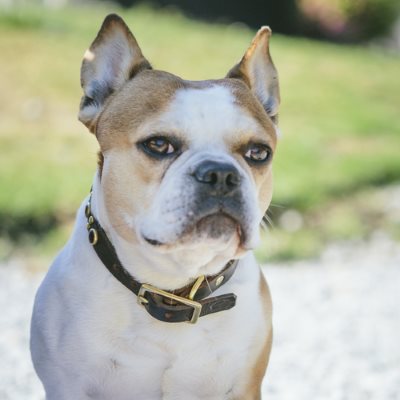 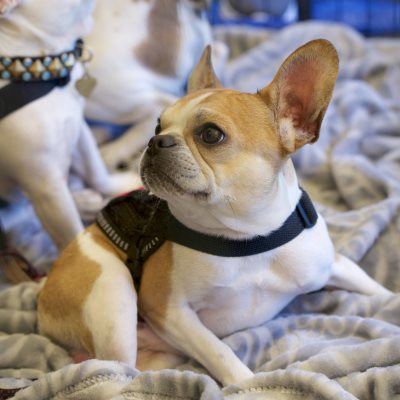 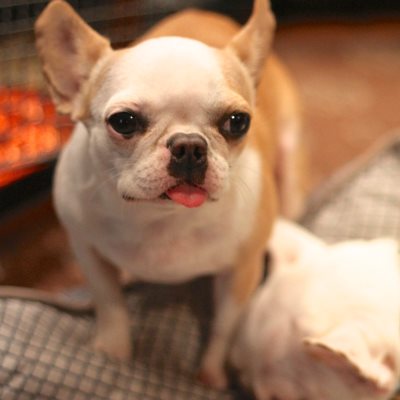 A bit about me and my dogs, I have 4 Royals that make up my immediate Royal Family. I’ll introduce them to you from left to right in the photos above. Eddie here is my special fella, my service dog. He alerts for seizures. He has made my life so much easier. I used to be on medication 24/7 and now I just carry it with me. If he alerts, I take my meds, and I have time to get seated to care for myself. Mr. White is Eddie’s and my good old friend. He failed seizure alert work alerting when it was over instead of beforehand! But in the meantime, we fell in love with him. Both Eddie and Mr. White are like two old friends together. Jimmy and Sugar (or Shug-a-da-boog as I call her) are my Micro Mini Royal Frenchels. Jimmy is a star and Shugs is a very funny 6.8 lb. dynamo who is the light of my life! You may have seen her holiday talking video, she is a riot. These little guys make my life grand! Not only do I not have to take medication 24/7 any longer due to Eddie’s great service, I laugh every day with my little clan as they entertain me morning and night with their antics. They also help me teach the new pups and dogs the ropes. 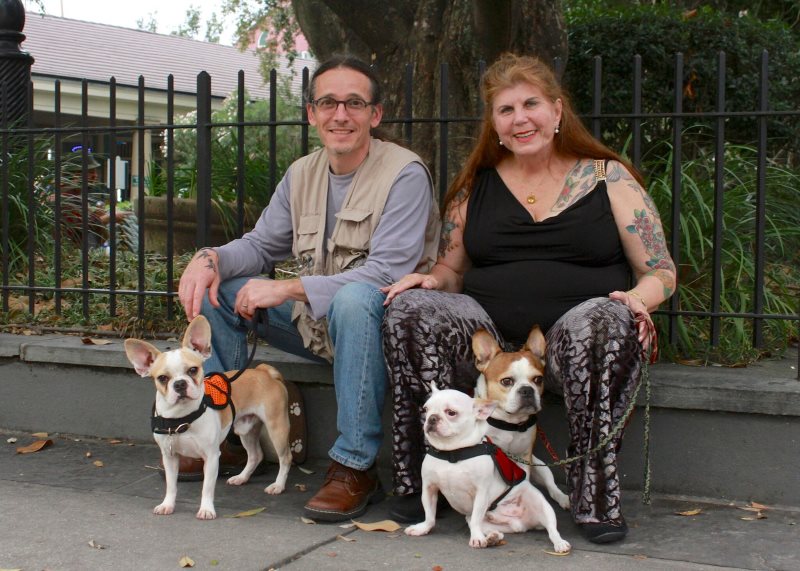 Royal Frenchels are fun, highly intuitive, intelligent, loving and playful dogs. They have changed many peoples’ lives for the better, including my own. I am no longer stuck up thinking Frenchie’s are somehow better. When you think about it, why would you get a dog that has so many health issues? Even the best bred Frenchie’s have health issues while a Royal Frenchel will live at least twice as long and hardly ever have to go to the vet.  Also, they are far easier to train! That makes my life easier as a breeder and their personalities are to die for! So, I finally gave it up for my Royals years ago sticking with a dog that is so intuitive, not pushy, but deeply attentive to people and their needs. They don’t bark a lot, chew much or do anything really that makes them difficult dogs. Royal Frenchels became our dream dog come true as they were for those other families that had a Royal Frenchel. Who wouldn’t choose a dog that has great health, a much longer life expectancy and one who is far easier to train and is a pure joy to live with? The answer is easy – get a Royal!