There is no denying that a mini French bulldog, also known as a teacup French bulldog, is adorable. This breed is popular for its appearance, small stature, and fun-loving personality. But it also comes with a host of health problems that may make you consider alternatives to the breed, like the Royal Frenchel Bulldog.

Royal Frenchels come in three size variations, all of which are smaller than most dog breeds. The caveat is that, despite their small stature, these dogs can exercise and play with the best of them. They’re bred primarily for health and sturdiness, making them a breed that can grow with you and your family.

There is no other breed that’s quite like the Royal Frenchel. We are the one and only breeder of this gorgeous dog breed. Although we are based in Seattle, the Royal Frenchel family has now spread across the United States, Canada, and other countries, as the world has quickly fallen in love with our loveable breed of bulldogs.

Still, when you add a Royal Frenchel to your family, you know that you’re getting a rare breed of dog with only one breeder knowing the exact combination of breeds that goes into your dog’s lineage. Although other dog breeders might claim to breed dogs similar to the Royal Frenchel, this dog breed is genuinely one-of-a-kind and only comes from our Royal Frenchel family.

The Royal Frenchel’s rarity is one of its best features. This dog stands out from the pack in appearance, personality, and health, making it an excellent companion dog for any pet owner who is willing to train and work with their Royal Frenchel from pup to adult dog.

Royal Frenchel health is one of the top considerations for people looking to add a mini Frenchie to their family. Why? Miniature French Bulldog health problems are very common.  As adorable and loving as they are – purebred French Bulldogs are often riddled with health problems. This can cause a lot of financial issues for pet parents over the lifetime of their pup.

French bulldogs are also known for being a brachycephalic breed. This means that they are more susceptible to suffering from brachycephalic airway syndrome. This health issue is one that many small dog breeds with short noses and smooshed-in faces suffer from as well, like the pomeranian and shih tzu. Because of their short nose bones, Frenchies may be more prone to respiratory issues that cause changes to the lungs, breathing trouble, and reflux, among other health problems.

The Royal Frenchel breed story is one that other breeds can’t compare to. The Royal Frenchel is a unique breed with only one official breeder. Anahata Graceland is the creator of the breed, and she began her breeding career as a boxer and French bulldog breeder. An avid French Bulldog enthusiast, Graceland was inspired to create the Royal Frenchel Bulldog to mirror some of the best Frenchie traits while creating a healthier pet.

Royal Frenchels are primarily a mix of the French bulldog and the Cavalier King Charles spaniel. However, there are other breeds in the mix to boost health, personality, trainability, and the other incredible traits these dogs possess. Royal Frenchels evolved into what they are today through more than 15 years of breeding and dedication to creating a healthy gene pool.

The micro mini Royal Frenchel is closer to the size of a mini or teacup French bulldog, ranging between 9 and 14 pounds. Mini Royal Frenchels tend to look somewhat puppyish, even as adults, with their appearance staying the same even as they make the transition from pup to adult dog. Regular Royals, also look very much in appearance from puppyhood to adulthood, similar to standard Frenchies.

According to the American Kennel Club, the average life expectancy of a French bulldog is 10 to 12 years. Mini French bulldogs average slightly higher. The same trend holds true with Royal Frenchels, with the micro mini versions usually outlasting regular and small versions of the breed.

However, Royals have a longer lifespan, on average, than the French bulldog breed, even in its mini form. Royal Frenchels are known to live between 14 and 20 years, with Micro Mini Royal Frenchels often living closer to the 20-year mark. This longevity is due to the breed’s excellent gene pool that has developed naturally over time, allowing some of the best dog traits to shine through.

Mini French bulldogs are similar to their standard counterparts in that they don’t have extremely high energy levels or the need for high amounts of exercise. Still, they enjoy going outside, taking walks, and even running around in the backyard with their family members.

Royal Frenchels can vary in energy and exercise needs, depending on their size. Larger Royals tend to be more into hiking and adventures than smaller Royals, but all of them do well with a moderate exercise routine that keeps them moving, agile, and fit.

It’s important to note, too, that Royal Frenchels are known for their agility. They’re bred in a way so that they don’t suffer from many of the bone and joint problems that the French bulldogs and other Frenchies face. This trait helps their bodies stay agile and strong as they jump around and run off their energy.

A large-but-laid-back, lovable personality is one of the best Royal Frenchel traits. In fact, the nature of Royals is much like that of the French bulldog except that they have a far more mellow nature, so if you love the friendliness of Frenchies, you’ll love what Royal Frenchels have to offer.

Royals are known for their intelligence and people-pleasing attitude. These traits make them exceptionally eager to learn and train. They’re also affectionate, love to snuggle, and can pick up on the emotions of those around them. It’s because of these personality traits that Royals make excellent service pets, companions, and family dogs.

The Royal Frenchel breed is all about family, much like the French bulldog. Both breeds are easy-going, fun-loving, and sweet, making them calm and nurturing around kids and other pets. However, across the board Royal Frenchels adore children which unfortunately isn’t true for all french bulldogs.

Royals take these beloved traits from the Frenchie and magnify them. These dogs are loving, affectionate pups who love to play and have fun. When you choose to adopt a Royal Frenchel, we give you all the tools you need to nurture your dog’s loving spirit and make him or her an excellent addition to your family.

Any dog breed can suffer from separation anxiety, but some breeds are more prone to it than others, including the standard and mini French bulldog. A Frenchie puppy or adult can become so distraught when its owner isn’t present that it refuses to eat, chews up furniture, or barks or howls until the owner returns.

Royals don’t tend to be an anxious breed, and their easy-going nature minimizes the chances they get separation anxiety. The key is in your dog’s training. If you remain a consistent, reliable person in your pup’s life and learning, he’ll learn to trust that he’ll be okay when you’re gone.

Some dog breeds are fortunate enough to be recognized by companies and award programs for their outstanding features that put them ahead of other breeds in specific categories, like longevity or temperament. We’re proud to say that the Royal Frenchel is one of those unique breeds that is lucky enough to receive the #2 spot on the Farmers Insurance list of Top Hybrid Dog Breeds.

Farmers Insurance, a company that provides pet insurance as one of its many types of insurance policies, recognizes the Royal Frenchel for its laid-back personality, athleticism, and ability to become an excellent family dog. This award comes after Farmers Insurance considered 246 dog breeds, making it quite the accomplishment for our Cavalier King Charles Spaniel and French Bulldog (along with other breeds for stabilization) mixed breed to achieve.

The Royal Frenchel breeding process doesn’t stop when a puppy finds its forever home. Our Royals are part of our family for life, which is why we want to see both of you succeed once you head home.

We offer collaborative training to our new Royal Primary Families. Through specialized training sessions, you’ll get all your questions answered about your Royal Frenchel puppy as well as hands-on training techniques to help your Royal learn. The Royal family is with you every step of the way.

The Royal Frenchel is a genuinely unique breed that comes from just one reputable breeder – its original breeder, Anahata Graceland. Anahata has bred dogs for more than half a century. There is no overlooking the sweet personality and cuteness of a Frenchie dog, but when it comes to health, and a mellow fun nature dedicated to serving you Royal Frenchel is leaps and bounds better than the French bulldog breed.

A Royal Frenchel is one of the best family dogs you can have. Its laid-back temperament and willing, motivated, and easy-to-train attitude make it the perfect mix for a pet family. And, because there are different sizes of Royal Frenchels, you can even choose one that will keep its puppy-like look throughout its lifetime, much like the teacup French bulldog puppy.

We invite you to contact us today on our website, by email, or phone to learn more about our beautiful breed and how you can prepare to adopt one. 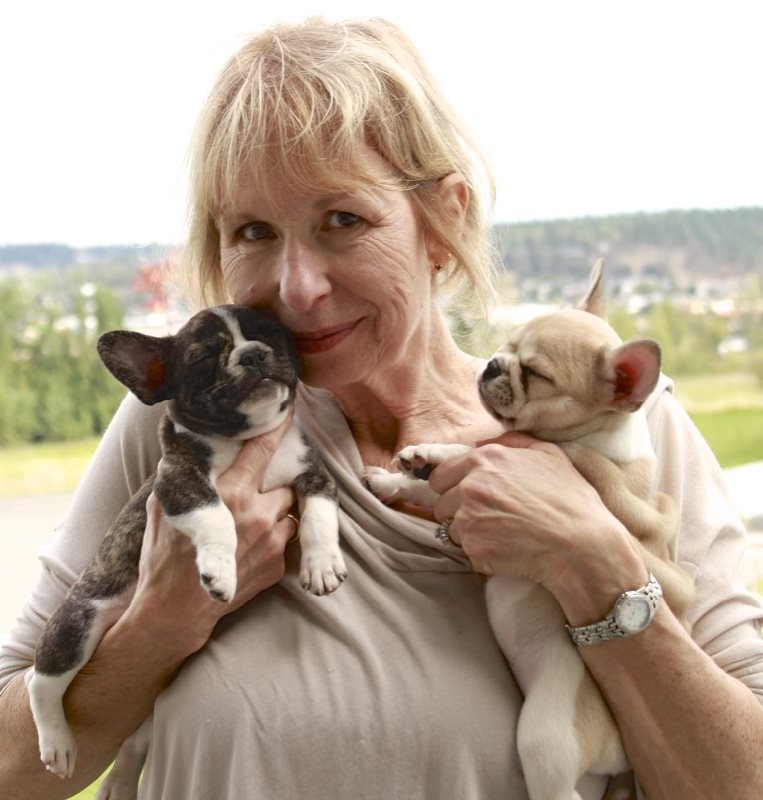 Teacup French Bulldogs are really fun dogs. It is sad that they suffer so many of the same ills and health problems as the regular size French Bulldogs, sometimes more. They are fraught with allergies, cancer, spinal issues, knee issues, breathing problems and other health issues. That’s why you have to get an insurance policy particular to the English and French Bulldog breed as they expect it will have need of vet care so the policy reflects that in its services.

We are the only breeder in the US or anywhere that we have found that puts the Health Records for their breed on their site.

Royal Frenchels, on the other hand, were created by a number of breeds crossing and allowing gene pools to loosen up the superglue of the traditional Frenchie genes to create an Award Winning long-lived dog with superior health and a great personality.