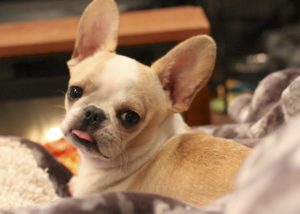 Puff Daddy is a very unique personality mixing MacGyver with Felix on The Odd Couple! He is great at figuring out what you are going to do before you do it and to position himself for the outcome he wants! He will insure he gets to stakeout longer at nap time or go with you when you walk outside by being so quiet at your feet you simply don’t notice he’s there until he scoots past you a moment later. He is smart wrapped in a very fastidious nature. A nature filled with snuggle love, best pal – blue ribbon trials and great dining aspirations! He is a kick and his tongue that is sticking out so often keeps you smiling as he looks up at you with those deep pools of his obvious soulful nature.

Puff was actually named after the Magic Dragon Puff, but he has his own rhythm and loves music as well, so as he grew more beefy he became Puff Daddy!

As a Micro Mini,  Puff will probably not exceed 9 lbs and will be a great travel pal. People will be stopping you every few feet to meet him as they will love his looks. Puff is actually a very handsome boy! His coloration will become darker over the next year as well.

So, don’t miss Puff on your visit or call to Skype soon as he is now up for his new home!

Fill the form below to make a deposit on this Puppy.